Discover why padel is so popular

Padel has been one of the most successful sports in last decade. More and more clubs practice padel each day, whether on courts or in sport centers, and gradually there are more and more hosing estates that allocate some land to build courts. Despite its elitist origins, padel today has become a sport suitable for all budgets, allowing us to spend some time with friends and exercising to improve our health.

The origins of this unique sport date back to the nineteenth century, when the crews of British and Irish ships played with a ball and a wooden shovel (bat) against the metal walls of the vessels, to make the trip more enjoyable. The passage of time made this practice go to land, and in the 70’s, a Mexican named Enrique Corcuera, build what will be the first court of modern padel in his home. In Spain, the origins of the game came courtesy of Alfonso de Hohenlohe, a friend of Enrique’s, who ordered the construction of the first facility in a club in Marbella. From then on the practice of padel spread throughout Spain in unstoppable fashion.

One of the main reasons leading to their success is the ease of play, as confirmed by Francisco Javier Abellán, director of Padel.info: “it is not a sport that requires achieving a high level of technique to enjoy playing, so it is quite attractive and addictive. Even you can learn yourself, for better or worse, without a coach. Because it is played on a smaller scale court than tennis, you do not need to be physically very fit.

Age, says Abellán, is not an impediment either, “the age range in padel players is perhaps the broadest of all known and practised sports.” Furthermore, the amount of money that we need to invest to start playing padel is not very large, since we have bats from 30 euro up, which may well serve to take our first steps. The hiring of a court is not very high either, and even less if we consider that the expense is divided among four participants. 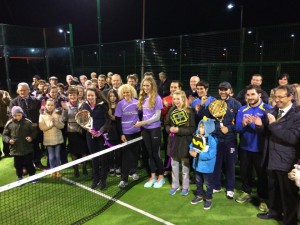 Tennis is undoubtedly the main source of reference for padel, so they coincide on some aspects of the game, but not all. First, the court is much smaller, and we have a wall of three meters high and part of the sides playing an active part in the game. When the ball hits it, we can return it to our rival, if it doesn’t bounce in our area again. This change in the way of playing is probably the hardest thing to learn for those who start playing padel. A good position in the court is critical to ‘read’ the hits, and to be able to know where to return the ball accurately.

The benefits of padel

The practice of padel, like any other sport, is of benefit to our health. Not only we increase our fitness, but, in the words of the director of Padel.info, “we also improve our coordination of movements, since the game is based on short movements of the legs, from side to side and forward and backward, coordination of both arms in order to hit the ball correctly, and reading the ball ahead of the next move to be able to position ourselves properly in the court.”

The injuries are not as prevalent as in other sports, but still may appear in certain situations. Most of them are due to poor posture when hitting the ball, but we must also be careful not to twist any ankles or hit ourselves against the back walls. Francisco Javier Abellán says that “the easiest way to prevent any significant injuries is warming up before every game and doing stretches at the end of it. We will also help prevent injuries by improving our technique in the execution of certain hits.”
Padel is a sport that can be practiced throughout the year, and is very easy to do in the company of friends and family. If you have not been exercising for some time and you don’t know where to start, we encourage you to try padel. But, very careful, because it is highly addictive!